Small copepods play essential role in the functioning of planktonic communities in the Arctic seas. This work presents the results of the analysis of population structure of the common planktonic crustacean Temora longicornis in the coastal waters in the southern Barents Sea in the summer season. The daily production level of this species has been revealed for the first time. Zooplankton samples were obtained with a Juday net from a station located in Dalnezelenetskaya Bay. Individual mass of the copepod was calculated using length-weight regression. The total abundance of T. longicornis varied from 28 to 456 ind/m2, biomass — from 0,1 to 1,6 mg dry weight/m2. Old copepodites and females prevailed in terms of the total abundance and biomass. The sex ratio was biased towards females. On average, sex ratio was 1 male per 4 female. Clear differences in occurrence of T. longicornis age stages and time of spawning were found in comparisons with 1970 that could be associated with the differences in the climatic conditions of these periods. The egg production rates were determined under controlled experimental conditions at three temperature regimes. Average levels of egg production and specific egg production at 5–10 °С were 13,1±0,9 egg per female per day and 0,075±0,006 female body mass per day, respectively. Egg production rate was statistically higher at 8 °С and 10 °С than at 5 °С. Larger females produced larger eggs; an inverse relationship was found for specific egg production. Egg production rate was weakly correlated to female prosome length. Egg-specific production rate of larger females was lower. Comparisons of our data with previous studies showed some similar traits in egg production levels of T. longicornis from the Barents, North, and Baltic Seas. Higher rates of egg production of Temora species were found in more warm regions (the Mediterranean Sea). Temperature was concluded to be the main factor determining reproduction of T. longicornis in the Barents Sea. 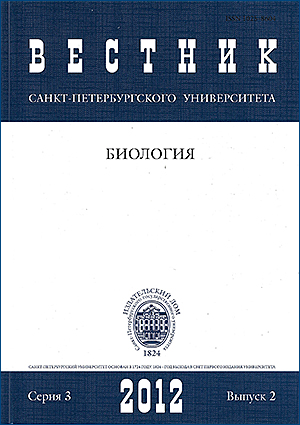 Articles of Biological Communications are open access distributed under the terms of the License Agreement with Saint Petersburg State University, which permits to the authors unrestricted distribution and self-archiving free of charge.

Most read articles by the same author(s)