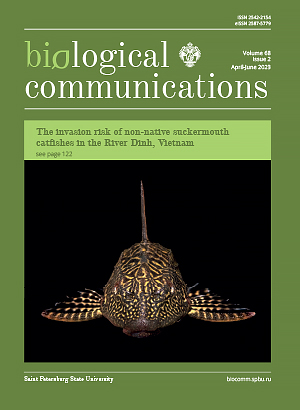 Aims and scope
Biological Communications publishes research from across all areas of the biological sciences, from classical disciplines such as botany and zoology to biotechnology and fundamental medicine, given the research is of high quality and might be interesting not only to narrow specialists, but to a broader auditorium. Some emphasis is given to rapidly developing fields: neuroscience and cognition; organismal and evolutionary biology; palaeontology; molecular, cell and developmental biology; genomics and proteomics; bioinformatics; classical ecology; marine and arctic research; mechanisms of diseases. In addition to being free to both authors and readers, Biological Communications is an open access and primarily online journal, which makes it particularly suited to research that requires high visibility due to its novel findings. Articles submitted to Biological Communications will benefit from its broad scope and readership and its dedicated media promotion. Our aim is to become the leading Russian journal in the field of life science, publishing both the best research from Russian institutions and attracting cutting edge research from around the globe.

Biological Communications is included in the list of the leading refereed academic journals and periodicals recommended by the Higher Attestation Committee at the Ministry of Education and Science of the Russian Federation, assigned for publication of the key results of doctoral dissertations (including the both Russian doctoral degrees: the PhD and the Doctor of Biology).